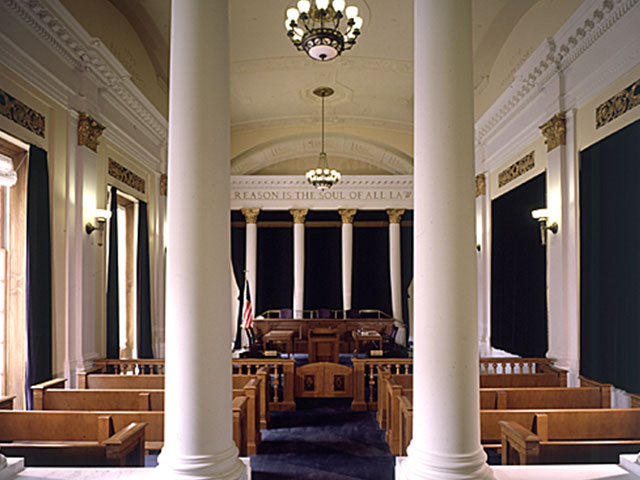 This courtroom is a recreation of the original courtroom. During the 1960s when the Court of Appeals moved to the courthouse at 19th and Stout Streets, this room was completely demolished to make way for more office space. A third floor level was inserted. Accounts from that period vary concerning the fate of the original architectural ornament. One source reported that the original marble columns found their way to a popular singer’s custom home in Aspen, Colorado. However, a sadder and probably more accurate account by a postal employee of the time is that the columns were simply broken up into convenient size pieces and hauled away to the dump. In the 1960s this type of space was often considered old fashioned and stuffy.

Fortunately, both excellent photographs from early years and the original drawings were available to aid in the recreation. Only the center portion of the ceiling and the very top portion of the walls above the ornate plaster entablature are original. Both of these areas required extensive restoration. The names, which are inscribed with the original gold leaf, are those of noted American judges and advocates of the law.

The decorative entablature work and columns are made of fiberglass reinforced plaster, reproduced by a small company in Jamestown, Colorado. The marble wainscot surrounding the room is newly fabricated stone from the Colorado Yule Quarry in Marble, Colorado. The heavy velvet drapery is a recreation of the original. This building was one of the first to benefit from the science of acoustics, new in 1913. The “windows” on the east side of the room are false, the drapery hiding acoustical panels, originally woven of horse hair. The original floor was thick cork with a border of marble. The new custom carpet with its lighter border follows the original pattern.

The judge’s bench is a copy of the original as is the railing (or bar) separating the public seating from the theater of the court. structures in the early 1900s. 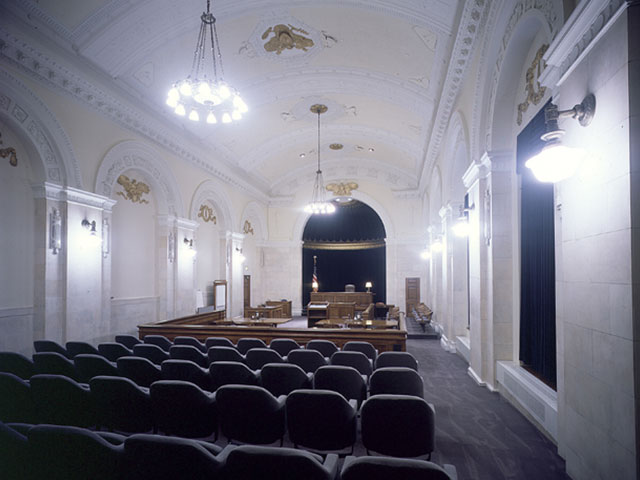 This courtroom is used as a trial courtroom by the U.S. District of Colorado. It name: District Courtroom A reflects its original historic name. It was originally created for the district and has been in continuous use since 1916. It has seen some significant modifications through the years, but not to the extent that the historic appellate courtroom on the second floor suffered. The most notable modification is the raised flooring, the theater-style seating, and the boxed well for the litigants added in the 1960s to improve sight lines. The courtroom’s furnishings are not original, but were refinished as part of the latest restoration. According to historical photos and the original drawings, on display in the Tenth Circuit’s Historical Display, the original judge’s bench, jury box, and witness stand were replaced (possibly during the 1960s renovation) to meet the then-current and present courtroom’s requirements.

Although the velvet window coverings are newer, the black velvet with gold decoration on the ceiling of the apse behind the judge’s bench is original, having endured for eighty years. The chandeliers in this room are original. During the renovation of the early 1990s, the colors of the arched ceiling were lightened to match the original paint finishes used. 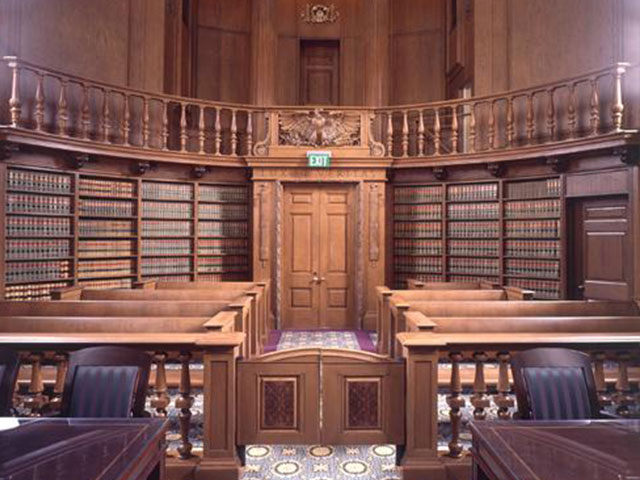 This grand historical space, trimmed in oak paneling, bookcases, and carved architectural detailing was the original the Tenth Circuit’s Library. The redesign and renovation caused this space to be largely restored and repurposed as a courtroom, favored by many judges, litigants, and the public for its rich and intimate setting.

It was converted for use as a courtroom. Most of the oak woodwork on the walls of the room is original, but has been completely refinished. Carved around the perimeter of the room, just below the ceiling, are the names of great legal authorities and writers from the earliest date of many nations. On either side, above the entry doors, is elaborate original carving, surmounted by a splendid full three-dimensional eagle.

The bookshelves lining the lower level are recreations of the ruined originals. However, the books are not part of the Tenth Circuit’s working collection. Instead, their primary purpose is to improve the acoustics of the room. The second balcony level once also had bookshelves. For both safety and security reasons, the second level walkway is not accessible.

All of the courtroom furniture in this space, as in the other appellate courtrooms, is new and was especially designed and made to be compatible, yet distinctly non-period, with the Neoclassical or Classical Revival architectural style of this courthouse.