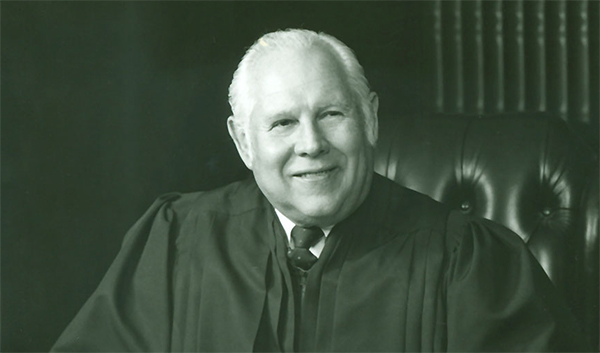 Judge Holloway had a long and distinguished career, culminating in more than 45 years on the federal appellate bench, and was the longest sitting judge on the Tenth Circuit Court of Appeals.   He was held in high esteem by his fellow judges, and known for his humility, civility, and dedication to the rule of law.  Chief Judge Mary Beck Briscoe said:  "We all have benefited from our association with this great man.  He has taught us how we should approach our cases, always reminding us to think beyond the legal issues raised and to also remember the people whose lives and livelihood will be affected by our rulings. But more than that, he taught us kindness.  He taught us to be kind in our dealings with each other, even if we were in disagreement.  Following his long tenure and his many contributions both professional and personal, he has left us a stronger court."

Born in Hugo, Oklahoma, Judge Holloway served in the United States Army during World War II, from 1943 to 1946.  He received his undergraduate degree from the University of Oklahoma in 1947 and went on to Harvard Law School, receiving an LL.B. in 1950.  After a brief stint in private practice, Judge Holloway served as an Attorney in the General Litigation Section, Claims Division, of the U.S. Department of Justice in Washington, D.C.  He returned to private practice in Oklahoma City until 1968, when he was nominated by President Lyndon B. Johnson to the Tenth Circuit Court of Appeals.  He was confirmed by the United States Senate on September 13, 1968, and received his commission on September 16, 1968.

During his more than 45 years with the court, Judge Holloway authored over 900 opinions.  He served as the court’s chief judge from 1984 to 1991.  Two of his law clerks went on to become judges on the Tenth Circuit Court of Appeals themselves.  Judge Robert E. Bacharach, who clerked for Judge Holloway from 1985 to 1987, commented:  "Judge Holloway has been my mentor and friend ever since, as he has been for all of his law clerks.  He was a humble, gracious, kind, loving man.  We will all miss him dearly."   Judge Jerome A. Holmes noted:  "I was saddened to learn today of the death of Judge Holloway.  The nation has lost a thoughtful, dedicated, and compassionate jurist, and, as a former law clerk of Judge Holloway, I have lost a mentor, dear friend, and colleague.  I know that Judge Holloway was very honored to serve his nation as a judge on the Tenth Circuit, and he served with great distinction."  Three other law clerks became judges on other courts:  George W. Lindley, a retired Oklahoma state district judge, David J. Richman, currently on the Colorado Court of Appeals, and Judge John E. Dowdell, a judge on the Northern District of Oklahoma federal district court.

Judge Holloway took senior status on May 31, 1992, but continued to work up until his death.  His work ethic was tireless and legendary.

Judge Holloway was the recipient of many awards and acknowledgments of his service to the law and to the judiciary.  In 1988, he received the President’s Award from the Oklahoma Bar Association for twenty years of judicial service.  In 1990, an Inn of Court bearing Judge Holloway’s name was chartered by the American Inn of Court Foundation; the William J. Holloway, Jr. American Inn of Court.  In 1991, he received the Humanitarian Award from the Oklahoma City Region of the National Conference of Christians and Jews, and was conferred an Honorary Doctor of Laws degree by Oklahoma City University.  In 2006, the Federal Bar Association, Oklahoma City Chapter, introduced the William J. Holloway, Jr. Lecture Series, an annual event that has attracted prestigious members of the bench and bar across the country to deliver scholarly addresses.  Judge Holloway was a member of St. Luke’s United Methodist Church of Oklahoma City, Phi Gamma Delta Fraternity, the American Law Institute, and the American, Oklahoma, Oklahoma County, and Federal Bar Associations.

Judge Holloway is survived by his wife, Helen Hoehn Holloway, his daughter Eleanor Gentry Holloway, daughter-in-law Martha L. Whiteaker, and grandsons Jack Whiteaker Holloway and Joshua Whiteaker Holloway.  His son, William J. Holloway III, predeceased Judge Holloway.  Visitation will be held at Hahn Cook Street and Draper from 8 a.m. to 8 p.m. on Wednesday April 30, 2014.  A service celebrating his life will be held at 2 p.m., Thursday, May 1st, 2014 at St. Luke’s United Methodist Church.  A reception will follow at the Oklahoma History Center.  Judge Holloway will be privately interred at Rose Hill Burial Park in Oklahoma City.  Memorial donations can be directed to Doctors Without Borders, a charity long-supported by Judge Holloway.