Colorado Territory was officially organized by an Act of Congress on February 28, 1861, out of lands previously part of the Kansas, Nebraska, Utah, and New Mexico territories at the end of President James Buchanan’s term. During the term of President Abraham Lincoln three separate districts of the Colorado territorial federal courts were established in Denver, Central City, and Canon City. 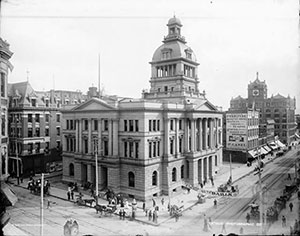 The Denver District Federal Court, covered the area east of the Rocky Mountains. Court was convened in September of 1861 in Denver in the Commonwealth Building on Larimer Street. After moving through a variety of commercial locations, the U.S. Treasury Department built the original Denver Post Office Courthouse on the south corner of Arapahoe and 16th Streets (1884-1886). Diagonally across from it rose the 20-floor Denver landmark Daniel & Fishers Tower. The post office courthouse was done in the Second French Empire architectural style.

When this building became too small and less functional for the federal offices within, the Treasury Department built between 1910 and 1916 and located at the corner of Stout and 18th Streets. This post office courthouse was designed by the New York firm of Tracy, Swartwout and Litchfield in the Neoclassical or Classical Revival architectural style. Symmetrical design, grand classical stone columns, and monumental stairs characterize this style. At the time it was one of the tallest structures, and considered the most beautiful building west of the Mississippi. 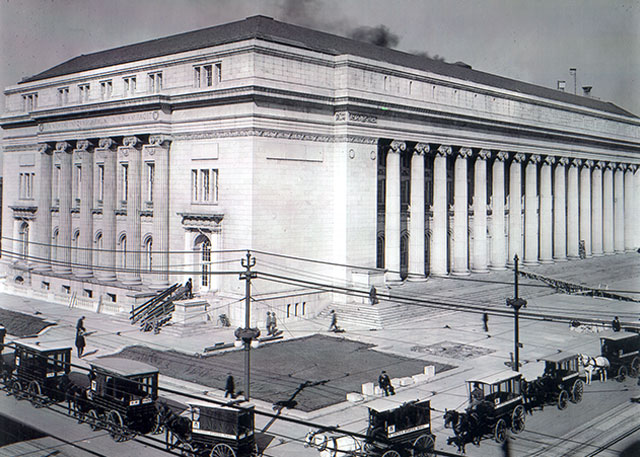 The four-story, marble building takes up an entire city block in downtown. The main entrance facade features 16 three-story columns. On the interior, the impressive main lobby, along the Stout Street side, spans the width of the building. Along the 18th and 19th Street are significant side lobbies connected with the main lobby. Upon major renovation of the courthouse, in April of 1994, Congress approved its renaming to the Byron White U.S. Courthouse.

The original budget for the building was $1,500,000, but was raised to $1,900,000. Upon completion in 1916, approximately $2,586,000 had been spent by the federal government. It was designed and was built for the Post Office occupying mainly the first floor, the U.S. District Court and the U.S. Court of Appeals occupying the second floor. As depicted in the 1909 drawings, the third and fourth floors were occupied by other federal offices, such as the U.S. Marshals, the Secret Service, the then-named District Attorney (now U.S. Attorney), the Immigration Offices, the Naturalization Office, the Land Office, the Customs Department, the Railway Mail Service, the Geological Survey, the Reclamation Service, the Internal Revenue, the Forestry Service, the Civil Service, , the Pension Office, the Office of Animal Industry, and the Weather Bureau. A platform on the roof housed the instruments for the official weather station of Denver.

‹ History of the Byron White Courthouse up Architectural Style ›